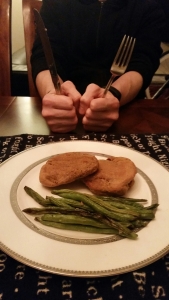 Here’s another Veganomicon dish that we’ve been getting reacquainted with lately! The ever so famous Chickpea Cutlets (page 133) are certainly a classic for good reason. I’m sure everyone has their own personal tweaks on these, but here are mine:

– Double the recipe every time by using 1 drained can of chickpeas instead of 1 cup, and double everything else. Bake an extra 10 minutes.

– I substitute anywhere from 2 to all of the 4 tbsp. of olive oil with water, with no problems.

– I use a splash of lemon juice instead of zest.

– If you use the food processor like I do, you can just mince the garlic first before adding the chickpeas to save the effort of breaking out the microplane grater. (If you’re out of  breadcrumbs you can always make some 1st by taking some toast for a spin in there too!) 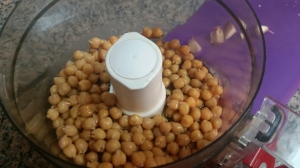 I like to use the food processor to make this super painless. 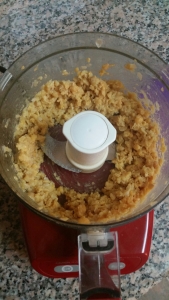 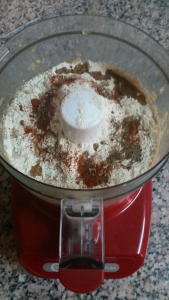 Switch to the dough blade and add all other ingredients. 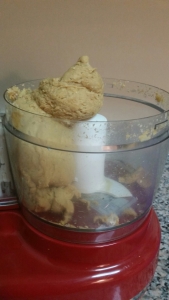 Knead it right in the processor! 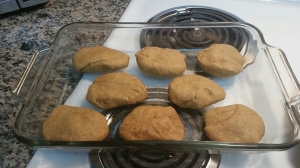 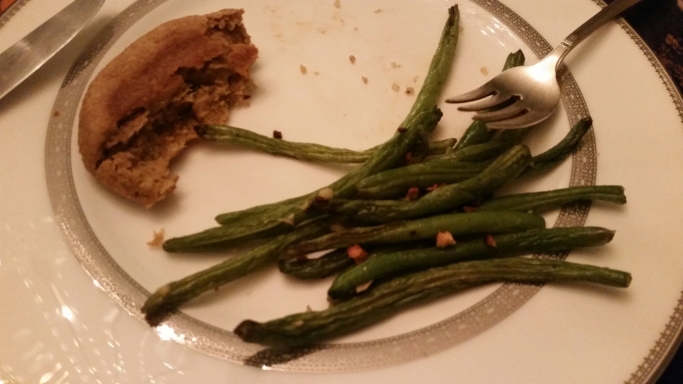 Even with the double batch, we’re lucky to ever have any leftovers!

Hey guys! So, I thought I picked a great time to start a new blog since I wasn’t busy with roller derby, but I may have been a little overly optimistic. We’re less than 2 weeks out to our May 10th wedding date, and I just keep finding things to keep busy with! (Picked up my dress today!)

Speaking of wedding stuff, I’ve been meaning to do quick blog about our little weekend  in Portland a few weeks ago, when we went down to get our wedding license! We spent a Saturday and Sunday night down there seeing friends, bicycling, and eating as much vegan food as possible. So here’s the whirlwind version of our trip in photographs… 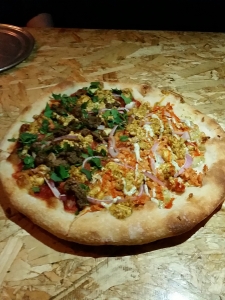 Our 1st stop was after checking in was biking over to Sizzle Pie! We couldn’t decide what kind of pizza we wanted, and didn’t want leftovers, so we settled on a medium of a very evil compromise… half Evil Never Dies (Spicy Aardvark blended red sauce, Tofu Cheese, Seitan Chorizo, Tomato, Jalapeno, Red Onion, Cilantro) and half Buffalo 666 (Shredded Buffalo Jackfruit, *we subbed Tofu cheese for the Daiya, Red Onion, drizzled with Vegan Ranch and Wing Sauce topped with Green Onion).  Fortunately Thomas was perfectly dressed for the occasion… 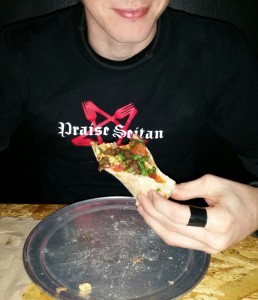 So ridiculously delicious. Seriously, if we lived here, we’d pretty much live at this joint. It was also our first time at the East Burnside location, and we really liked it. 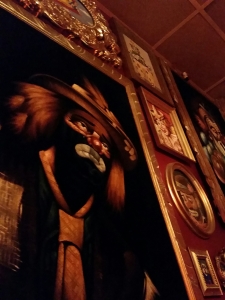 Several of our friends were in town for the Rose City Rollers game, so we biked over to the after party at Funhouse Lounge where we snapped the pic above in the Creepy Clown room! Our bike ride back included the luscious smell of fresh doughnuts baking in the middle of the night (and there was a huge line!), wafting from nearby Voodoo Doughnuts Too. 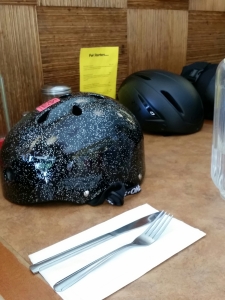 Next morning we hopped on our bikes and headed to what I guess we kind of consider our favorite breakfast place in Portland now, the Paradox Cafe. We tried to hit it after the Sunday brunch peak since it was Easter, and were pleased to see that our timing was great. No wait at all. After much deliberation on my part, I ordered exactly what I had planned on getting. Hahaha! 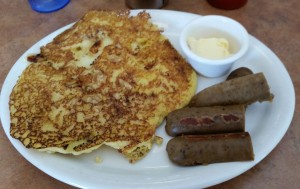 The Solstice corn cake has apples and walnuts in the batter and is stupid delicious. Smoked apple sage sausage was the perfect accompaniment. 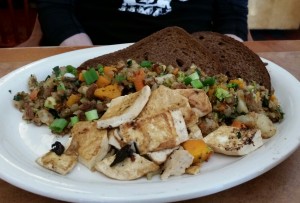 Thomas got the Rogue River Hash (roasted butternut squash, roasted yams, red potatoes, veggies, secret herbs & spices, made vegan with a tofu side, and  served w/ toast). Paradox isn’t all vegan, or even vegetarian, but most things are vegan, and just about everything on then menu can be made vegan, which is great. We’ve loved everything we’ve had here. 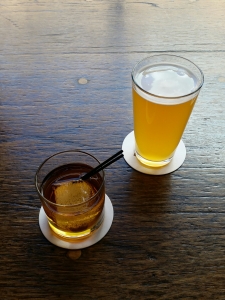 After this we took a short stroll down the street and parked it in one of the big booths facing the storefront windows for some leisurely people watching and newspaper reading. 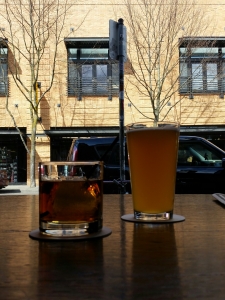 We were sipping for quite a while, and even saw a quick storm roll in, but it didn’t last terribly long. Overall we had some really great weather while were were there. And much like in Seattle, all the cherry blossoms were in bloom and made for some really picturesque moments. 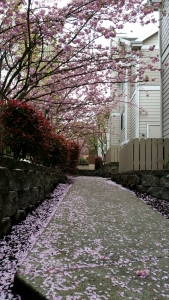 Later in the evening we decided to swing by the Deschutes public house to get some beer fresh from the source. Thomas thought this picture really needed a storm trooper in it.

Even though they have a pretty delicious cashew quinoa burger vegan option, we decided to hold out for Hungry Tiger‘s variety. Hungry Tiger is in the same boat as Paradox regarding their menu, almost everything can be made vegan, but they do serve meat. Sorry the pictures came out super dark. It was pretty dimly lit in there! 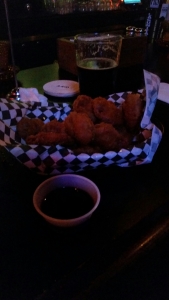 The Beet Fries are dipped in beer batter, fried, and served with a soy dipping sauce. These were REALLY, really tasty, but left me feeling heavy. As we made our way closer to the bottom we found a puddle of oil in the basket.

That being said, when my Falafel wrap came (subbed vegan ranch for the non vegan tzatziki, and subbed tots for fries) I was a bit overwhelmed by all the fried food. The vegan ranch was perfect with it, though I did have to take some of the falafel out, because I started feeling a little sick from all the grease. (I actually did end up with a pretty upset stomach most of the night. My body has started to reject a lot of fried foods lately. Kind of a good thing, but I’ll have to be more careful in the future!) 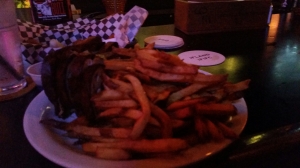 Thomas had the Reuben with fries and was pretty happy with it, though I think even he was overwhelmed with the amount of oil from the beet fries. Don’t get me wrong, this is bar food, I know. We got a little too excited and over did it. Totally. But does that mean I’m not going to come back here in two weeks to get a vegan corn dog? (the best!) Not at all. On the contrary, I totally will. 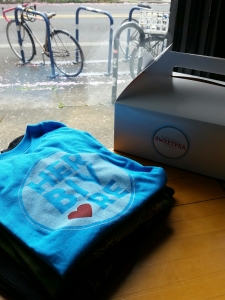 Monday we swung by the courthouse and got our marriage license! Then we headed over to the vegan mini mall to get some breakfast and a little shopping done. 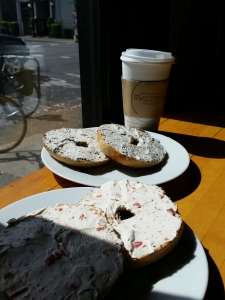 I opted for a bagel at Sweetpea to settle my stomach (a quick stop at the pharmacy also helped!) and we found a nice window to sit in for awhile. I had them pack me a nice box of big, glorious biscuits, and a seitan croissant to take back to Seattle with us. 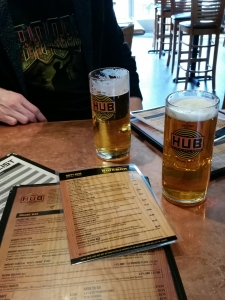 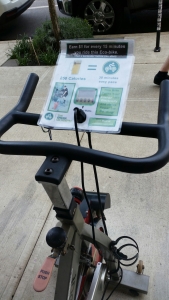 For every 15 minutes you cycle on this electricity generating bike, you get $1 off your tab! (up to $4 off) The bar is filled with all kinds of salvaged materials and has 15 organic beers on tap at all times. They also have several vegan options on the menu, as well as vegan cheese for pizzas. And speaking of pizza… 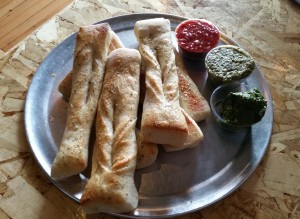 We made one last trip to Sizzle Pie before we left. We got some breadsticks with house red sauce, cilantro and pepitas vegan pesto, and creamy basil cashew spread. SO GOOD! 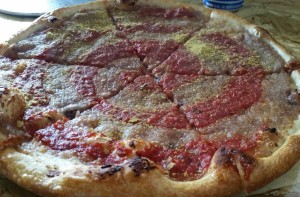 We also got a Spiral Tap (which we’d had before, and is fantastic) Creamy Caramelized Onion Spread, House Marinara Red Sauce and a light dusting of Nutritional Yeast, and this time we got to take some leftovers home with us.

My family gets here in exactly one week, so I likely won’t post much between now and the wedding, but we’re really looking forward to getting to see family, friends, and Portland again really soon! Pictures will be forthcoming I’m sure!

Invite us in via Social Media

Non Wordpress Blogs that I love

Just for a laugh

Vegan for my Wallet

Because being vegan is healthier and cheaper

Finding and liking vegan food, fashion, people and parties in Seattle since 2009

The Vegan lifestyle is not boring, complicated, or expensive. This blog was designed in the hopes to simplify the process of healthy eating. I welcome everyone, not just vegans.

All About Good Food & Great Health

A Vegan With A Plan

A Familiar Approach to Vegan Cooking

Wholesome Plant Based Recipes and Ideas